STRIVE FOR FIVE was set up by Steve Clark and his friends to celebrate him approaching the magic 5-year mark since being diagnosed with advanced (stage 4) bowel cancer.

Now that he’s smashed that, the objectives of STRIVE FOR FIVE are:

STRIVE FOR FIVE has reached hundreds of thousands of people with this message of hope via radio interviews, presentations, this website, fundraising events and social media (over 250,000 hits on Twitter in the first year alone).

STRIVE FOR FIVE has raised over £30,000 for Bowel Cancer UK . Thank you to everyone who’s helped and supported so far – there’s more to come!

In May 2022 Steve celebrated his NINTH anniversary since being diagnosed with Stage 4 (advanced) Bowel Cancer, this is a significant milestone as according to official statistics, only 10% of people with this diagnosis survive to 5 years.

Following several surgeries plus both intense and maintenance chemotherapy he has been NED (no evidence of disease) for the past three years.

Steve dedicates much of his time to helping others diagnosed with this disease, he is Patient Public Group Member with Bowel Cancer Intelligence UK (BCI-UK), a volunteer with both Bowel Cancer UK and Cancer Research UK, and runs Strive for Five to Beat Bowel Cancer – a campaign that aims to give hope to others with the stage 4 diagnosis. In addition, he is also actively involved as a lead patient in a number of clinical studies.

Steve hopes that sharing his story can help others tackle this disease positively.

We have a series of videos with Steve telling his story to Alexandra Legouix, we hope you’ll find these uplifting, you can find them on the ‘Steve’s Story’ page and our YouTube channel here.

Additionally, Steve was interviewed for the Mindset Unfiltered podcast to discuss how a positive approach has helped through his cancer, from diagnosis to smashing the 6-year survival. You can listen to the podcasts (Season 2 Episodes 4,5 and 6) HERE

George Alagiah (BBC) discussed chemotherapy with Steve and Professor Mark Saunders as part of his “in conversation with” podcast. You can listen (episode 6) HERE

All fundraising is for the charity BOWEL CANCER UK.

This is a small but amazing organisation that does so much good work to help people like Steve on their bowel cancer journey.

BOWEL CANCER UK is the UK’s leading bowel cancer charity. They’re determined to save lives and improve the quality of life of everyone affected by bowel cancer. The BOWEL CANCER UK vision is a future where nobody dies of the disease.

BOWEL CANCER UK is the support and campaigning charity for everyone affected by bowel cancer. 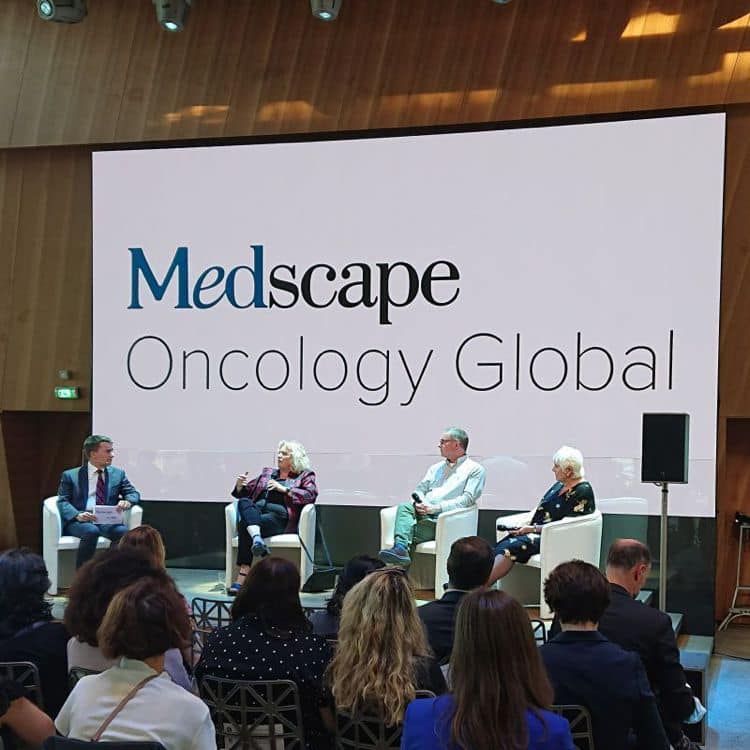 Faculty Member for "Closing the Gaps in Patient Centricity"

Steve was part of the internationally renowned panel for this meeting organised by Medscape at the European Society of Medical Oncology meeting in Paris on 11 September.
Chaired by Dr John Whyte (USA), the panel included Professor Nadia Harbeck (Munich, Germany), Professor Dame Leslie Fallowfield (Brighton, UK) and Steve in his role as a Patient Advocate.
The main focus of the discussion was on doctor and nurse communications skills and terminology. It is hoped that this meeting is the catalyst to begin an international programme of medical education to improve patient centricity.
The full video is available on THIS LINK.
Click to see the video and summary article

The NHS collects lots of useful information about us and our treatment , but it really needs to improve how this data is actually used so we can improve patient care.
This is highlighted in an important new paper, and in the related blog I was invited to write for Bowel cancer Intelligence UK. You can read the blog HERE
Click here to read the blog

Under the current NHS England policy, patients who are having successful treatment with the medicines cetuximab or panitumumab may not restart treatment if they need a break longer than 6 weeks.

Steve, together with fellow patient Jo Weeks, has set up a petition which has already received over 40,000 signatures.

Please sign this petition so we can get this rule scrapped. 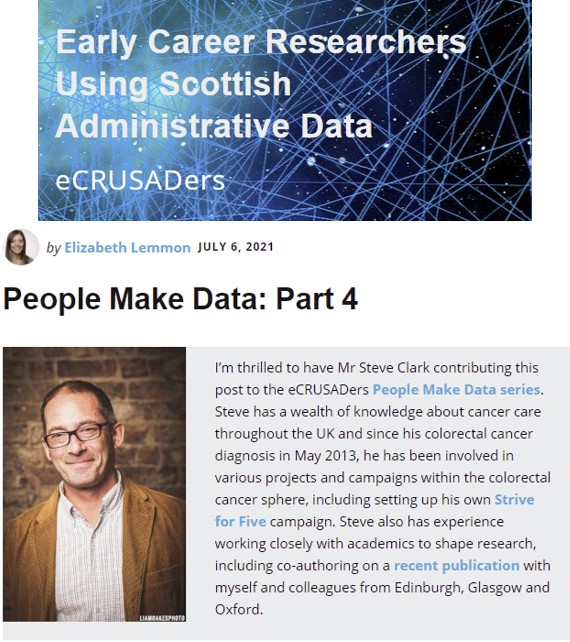 Steve was invited to write a guest blog for the eCRUSADers website recently.

In this blog Steve discusses how his experience as a cancer patient has enabled him to become actively involved in several clinical studies. He highlights the importance of actively engaging patients and the public in the research process from the outset. 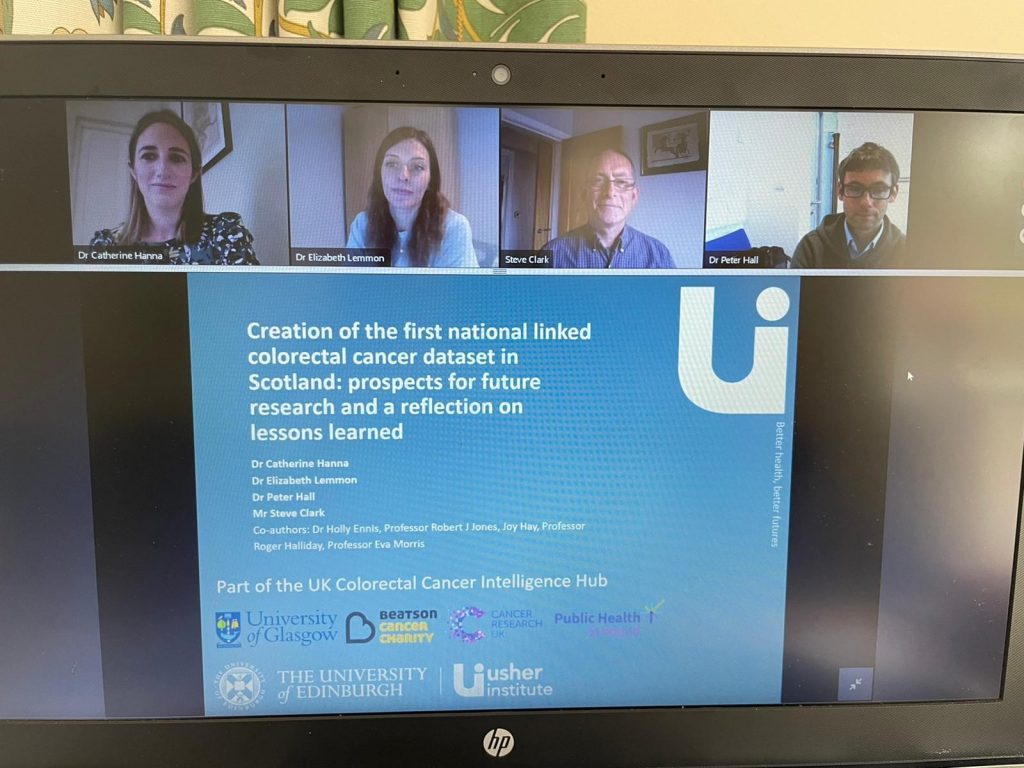 Webinar on the creation of a bowel cancer database in Scotland

Following the publication of the paper (see earlier update), Steve was invited to be part of the team presenting this work for the first time.

Steve’s presentation was on “Accessing health data for research – the patient perspective”.

A recording of the webinar is available via the button.

Steve has just been confirmed as a Campaigns Ambassador with Cancer Research UK.

In this role, he will be meeting with politicians to discuss the CRUK campaigns and try to influence key changes for the benefit of people with cancer. 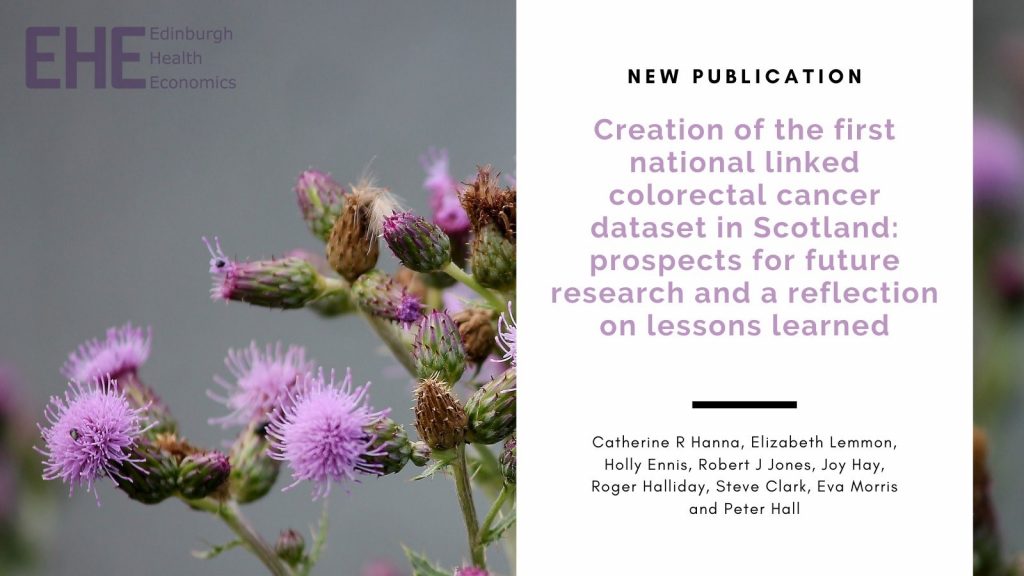 Co-Author on new paper on a linked bowel cancer database

In April 2021 Steve was co-author on a paper in a peer-reviewed journal for the first time. As well as being a personal milestone for Steve, this publication highlights the fractured way patient data is collected and managed.

This important piece details the two year programme to bring together all 23 separate Scottish databases where information is stored on bowel cancer patients. This new dataset makes research far easier and quicker which can only be good for patients! 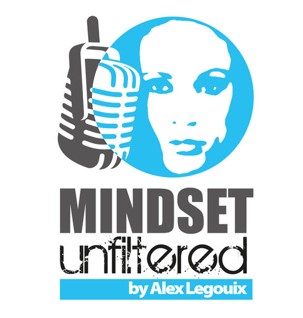 Podcasts on How a Positive Mindset has helped Steve's Cancer Journey

As part of Mindset Unfiltered, Alex Legouix talks with Steve Clark about how his positive approach has helped him cope with having advanced bowel cancer and has got him through several operations and six years of chemo (so far).

Steve is living a full and fun life as well as devoting much of his time to helping others with this disease.

There was so much to share that it’s formed three episodes and is definitely worth a listen if you or a loved one are facing cancer, or if you’d like to hear a truly uplifting story of how a positive approach to life can make all the difference.

Alex asks Steve about how a positive approach has helped him at all points.

Take a look at Season 2, Episodes 4, 5 and 6 on the link to the right or via your usual podcast route by searching for ‘Mindset Unfiltered’.

Listen to the Mindset Unfiltered Podcasts 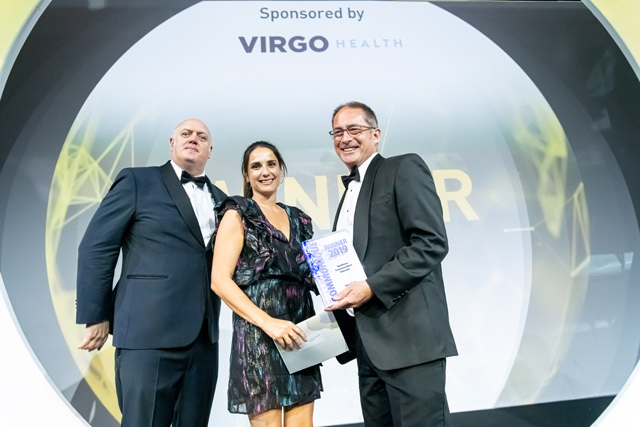 Steve has been presented a lifetime achievement award at the prestigious Communique Awards.

The HEALTHCARE COMMUNICATIONS ADVOCATE award is presented “to an individual who has made an outstanding contribution through healthcare communication throughout their career”. This is in recognition of Steve’s professional achievements as well as Strive for Five.

The citations for this award are on the link to the right. 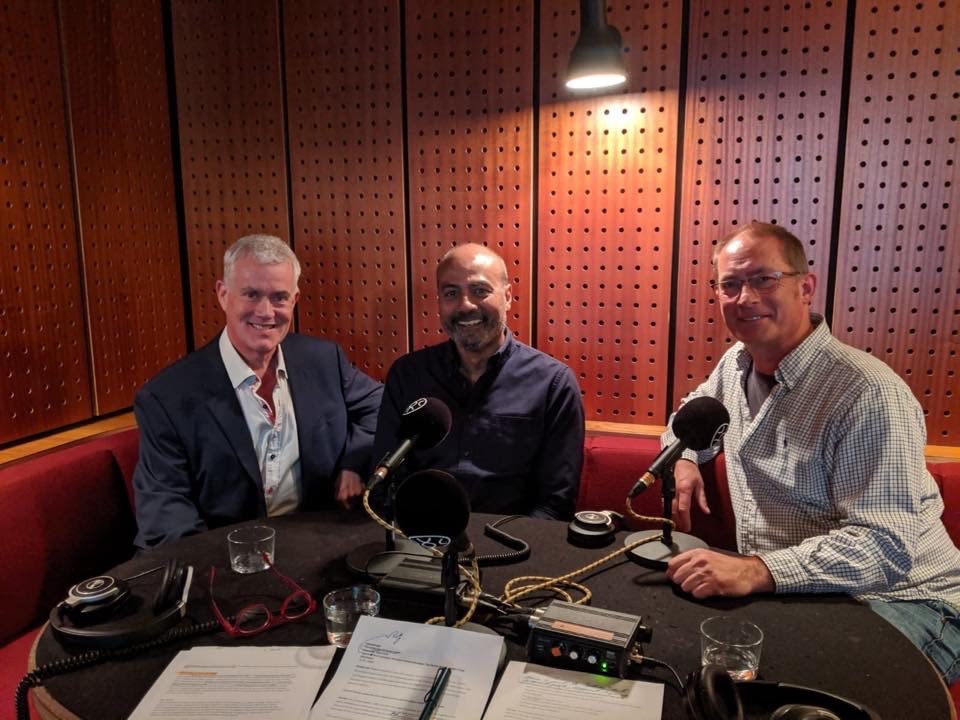 Steve was invited onto the charity’s podcast on CHEMOTHERAPY as an ‘expert patient’. In this episode, the BBC’s George Alagiah interviewed Steve and Professor Mark Saunders from the Christie Hospital.

This is a great series and well worth a listen by clicking the link to the right or via your usual podcast route by searching for ‘Bowel Cancer UK’.

listen to the Chemotherapy podcast 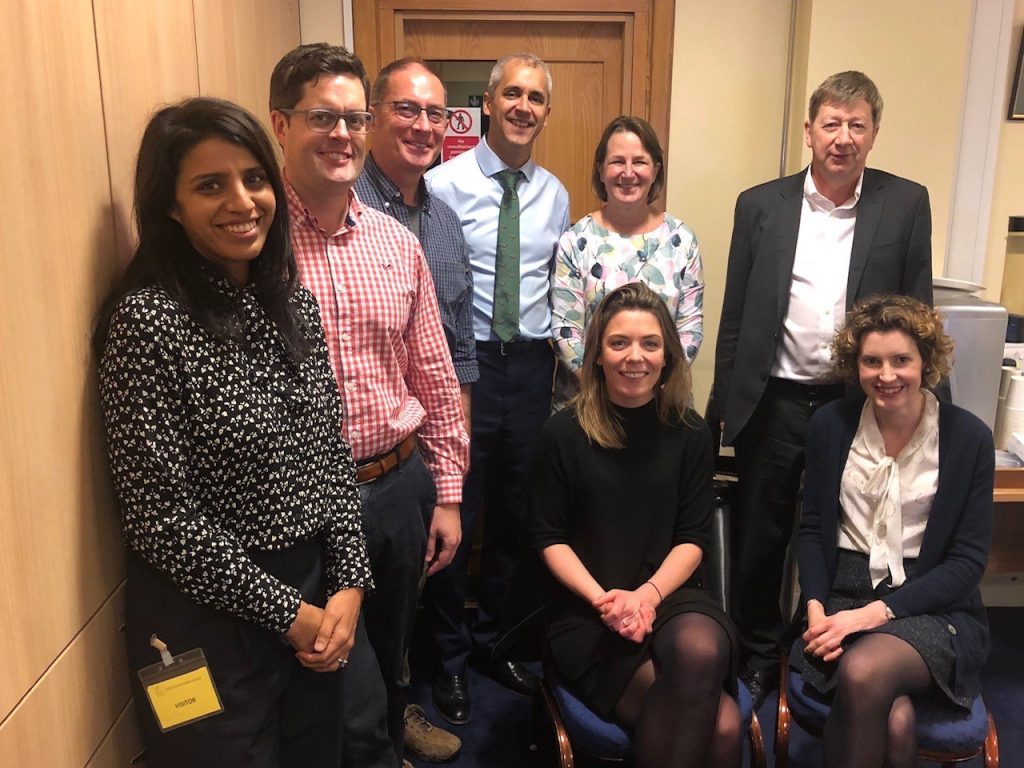 Steve has been invited to be a patient advisor on the ACCELERATOR study. This exciting new approach to research in advanced colorectal cancer has the potential to make a big difference in the future, Steve is honoured to be part of this at such an early stage.

You can keep up to date with all the fun and successes of STRIVE FOR FIVE on Twitter and Facebook.

Find out how you can donate, participate and support STRIVE FOR FIVE.

simply couldn’t happen without the help and support of so many wonderful people and organisations who have freely given time and resources to make this all happen. Steve would like to say a warm and deep felt thank you to everyone who has been involved at all stages: